Shopping Cart
Your Cart is Empty
Quantity:
Subtotal
Taxes
Shipping
Total
There was an error with PayPalClick here to try again

Thank you for your business!You should be receiving an order confirmation from Paypal shortly.Exit Shopping Cart

Quote of the Day

Section 3 (1) states that no woman shall be employed in night work (period of at least eleven consecutive hours including the interval between ten o’clock in the evening and five o’clock in the morning) except where the night work is....

(a) for the purpose of completing work commenced by day and interrupted by some unforeseeable cause which could not be prevented by reasonable care; or

(b) necessary to preserve raw materials, subject to rapid deterioration, from certain loss; or (c) that of a responsible position of management held by a woman who is not ordinarily engaged in manual work; or

(d) carried on in connection with the preparation, treatment, packing, transportation or shipment of fresh fruit; or

(e) that of nursing and of caring for the sick; or

(f) carried on in a cinematograph or other theatre while such theatre is open to the public; or

(g) carried on in connection with a hotel or guesthouse, or with a bar, restaurant or club; or

(h) carried on by a Pharmacist registered under the Pharmacy Act.

Read more about this Act here.

Approval of instrument by the Minister on the 26th day of January 1965:

Now Section 5 of the Flogging Regulation Act of March 1903 stated that no sentence of flogging at the time shall be carried out except with an instrument approved by the Minister :

So in the Flogging Regulations act in 1965 described the approved instrument as such:

"I, the Minister, hereby approve as the instrument with which sentences of flogging shall be carried out, the cat-o-nine tails. that is to say, a rope whip consisting of a round wooden handle twenty inches long, and one to one and one-half inches in diameter with nine thongs of cotten cord attached to one end of the handle, each thong being thirty inches long and not more than three-sixteenths of an inch in diameter, and knotted at the end or whipped at the end with cotton twine".

See below a cat -o-nine tail. 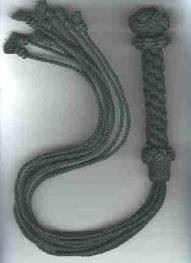 Read more about this regulation here.